Yesterday was extremely tiring. The first day back at work, and by 9pm I was done. I had to go in early for the xrays, and the less than usual calorie intake that I’ve been getting didn’t help, but I’ll be adjusting that soon.

So last night I got a ton of sleep, and promised myself I’d get a super smoothie in the city today. I think it’s the first thing I had in a week where I considered myself to be “full”. I’ve got some ingredients at home that my mom left to play with, soup and Ensure gets boring after a couple days.

I tried drinking through a straw and it was a total failure. I just drank out of the cup, which was a success, but messy. I also had coffee now that I’m off antibiotics and painkillers, and I think I’ll reward myself with a beer when I get home.

Went to the doctor today for my post-op. Everything was looking fine! I still have to wear the bands for some weeks, which I’m prepared for.

Here’s the much awaited x-ray. I haven’t seen my bite this aligned since…I don’t remember when.

And ow. Yawning is painful.

Bands finally snapped last night. Putting them back in was no big deal though. 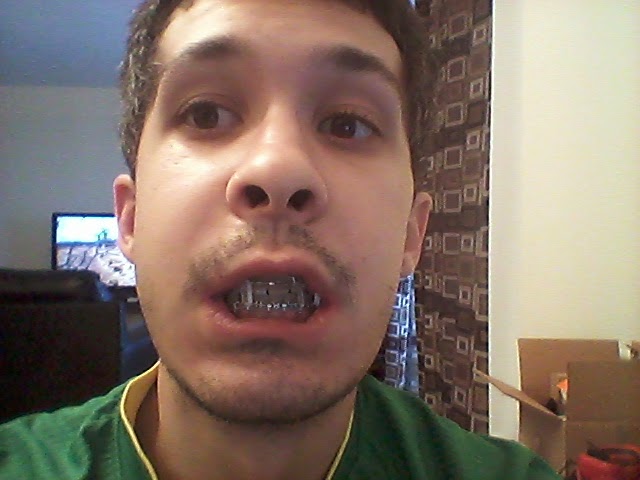 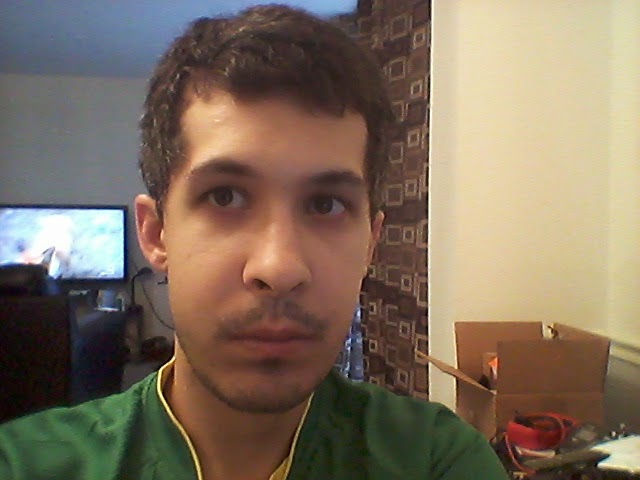 And not as puffy today! I woke up at 7, took a bunch of meds, and was ready to work by 9am. The day was fine, even with the meds I was only a little loopy.

And I finally shaved! The swelling is really coming  down.

No more updates for a while, I’m going to go for my post-op checkup and take it from there.

Less swelling, less stuffiness, less pain. I stopped icing and moved to heat pads for the day. I was less sleepy today after meds, and I didn’t need a mid-day 4 hour drug coma! Eating water ice today was a success! I just had to let it all melt so that I could basically drink it. Maybe ice cream later.

Tomorrow I’m going to try to work from home. I’m getting a little restless not having anything to do all day other than drinking food that Adrianna  makes me food and playing video games, and I feel like I’ve got some mental focus back now so I’m really looking forward to some activity.

While the pain and swelling are controlled with meds and heat and ice paks, I still have my jaw wired shut via bands. I still get some dizziness if I move my head too fast, or if I lean over a little too much. There’s some discomfort if I try to talk or smile too much. I still have to sleep upright otherwise stuff will come out of my nose. I’m still on a mostly liquid diet and that’s not going to change any time soon, since my jaw bones still have to recover.

But I feel almost “normal” now, aside from a few side effects of the drugs. And the part about not being able to use my mouth for anything . And having a poofy face. But, a world of difference from day 0.

Here’s a combined progress photo of right after braces (1 year ago), right before surgery (5 days ago), and today.

I woke up with less pain than the morning before. And gallons of drool that flowed down my entire body. I recommend sleeping in shirts that you wouldn’t mind becoming wash rags.

Still swelling. Poof. This is the last day of icing, moving to warm packs.

Around mid-day I started feeling some things I haven’t felt in a couple days.  The roof of my mouth is gaining more feeling and my lips feel like I got out of light numbing from the dentist. My cheeks and upper lip seem to be coming back as well, so maybe tomorrow can be shave day.

I’m going to try and have some warm soup today. My appetite is coming back. I’ll probably have to venture into foods other than Ensure if I want to not go crazy the next couple weeks.

Just woke up from a oxycodone/sudafed coma. The drowsiness of that combination will put me to sleep no matter what I’m currently doing. Fortunately I woke up in time to 1) take the 2nd round of meds, thank goodness because I was extremely stuffy and 2) watch the PSU game.

I have an oral rinse that I’ve been taking since surgery. On day 1, rinsing was very difficult. Not being able to feel the roof of your mouth makes it hard  to swish, and makes you feel like you’re not actually rinsing (but you are). Rinsing on day 4 feels weird, but now I think I can feel the rinse splashing against the top which makes it easier. There’s still no spitting since my jaw is wired shut, so you let it fall out of your mouth and rinse again with a water afterwards.

The soup earlier today was awesome. Something hot instead of cold for the last 3 days. I was brave enough to try thicker soup for dinner and it was super delicious. I can’t believe how good warm semi-regular food tastes after having just water/juice/ensure/boost for a few days. It’s the little things that make me happy during this recovery. Tomorrow I’m going to try for melted ice cream or water ice!

Woke up extremely stuffy. sort of like that feeling you get when you wake up sick. but, I’m not sick, my sinuses are just extremely congested.

No nosebleeding or leakage during the night which is great, I slept mostly upright. After taking some children’s sudafed (I’m getting the good stuff today) I uncongested pretty easily, and drank some more oxycodone. Time to ice.

Took a shower today too. Felt awesome after being all sweaty in the hospital bed, and half peeing on myself from trying to pee while not getting out of bed. I feel slightly more alive now.

Ow ow owww it hurts. 6 hours without glorious liquid oxycodone hurts. My families came to visit, and with all the activity I’m sure I stressed my jaw a bit too much.

Took some more sudafed and hydrocodone. I do not recommend operating any type of machinery. Sometimes it’s hard to keep my eyes from crossing.

I tried to get some sleep but I had to wake up again for vitals at 4am. After that I slept until 6, went back to sleep and probably woke up around 8. By that time the hospital was getting busy and I just kind of drifted in and out. I think I slept on and off enough during the day before that I wasn’t completely de-energized.

Surgical staff came in and poked around, did some feel tests. I had the majority of feeling back in my face (except the jaw). Doctor said it was due to my good “capillary reflow” which I think is basically the reflow of blood to the jaw after they reattached it.

Breakfast consisted of the same liquid diet as the day before. Apple juice, tea, broth, and some water ice/sorbet which was even more difficult to eat today as Doc put a couple more bands on, which makes this the most inconvient day so far. But damnit, I did it. I found that it is impossible to eat jello with a wired jaw no matter how hard I tried.

After breakfast and vitals they took me off of my beloved hydromorphone. To my surprise I didn’t need it anymore. I started to work up some discomfort (and really, not a sharp pain, but pain from swelling and pressure).

Lunchtime came around and I got upgraded to creamy liquids, so I got cream of chicken and managed to eat that by pouring it into a foam cup. Pour any liquids into a foam cup! It makes it so much easier to eat/drink than some of the plastic cups they had at the hospital.

After that I slept until discharge, where they unhooked my IVs (again, I think the 2nd most painful part of this ordeal, the 1st being having them put in) and gave me my cocktail of 7 drugs to get. Antiobiotics, oxycodone, nasal spray,nasal decongestant, sudafed, special mouthwash. Stopped by the apothecary before going home. Not a lot of swelling yet.

Got home, took all the drugs and felt very good. Brought me back down to a 2 on the pain scale. Iced my face once in a while to keep the swelling down. Drank some Ensure. And wrote blog posts for the last 2 days.